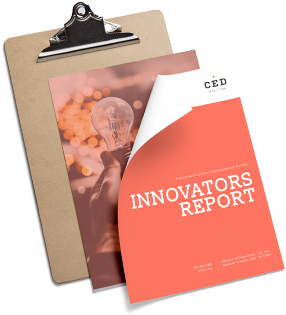 $4.6 billion raised establishes a new record. A 35% increase above previous record set in 2020

RTP, NC, February 21, 2022 – The Council for Entrepreneurial Development (CED) released its annual Innovators Report of equity funding for calendar year 2021. Each year since 2000, CED has tracked the investments in North Carolina-headquartered, high growth, high-impact companies. In 2021, a total of 222 companies raised a record breaking $4.6 billion across 250 separate funding events. That is up 35% over 2020 dollars raised and a whopping 600% over 2016. “Big Deals matter,” says Hunter Young, CED’s Head of Capital, “Epic Games raised $1 billion dollars in a deal in our state and that makes an impact. But we tracked another 15 deals where companies raised more than $50 million,” he added. “The number of larger deals raised jumped almost 50% over the year before.”

A total of 300 investors participated in the deals. In years past, Southeast-based funds dominated the funding source. While Southeast-based funds participated in 28% of all the deals, funds from Northeast participated in 24% of those deals and Funds based in California 23% of all the deals. “Money travels,” says Young. “It was a record year for inflows into venture capital and those funds are looking for good companies to invest in.” He added. “It’s now well known that great companies can start and grow in North Carolina.”

For the second year in a row, the Technology sector leads the way with $3.2 billion in funding (69% of the total). The Life Sciences sector was second with over $1.1 billion dollars or 24% of the total. Both numbers are the highest recorded since CED has been tracking the data. “In terms of absolute dollars Tech sector was the highest, but relative to years past Life Sciences, and the Advanced Manufacturing & Materials sector both grew at a faster clip,” said Jay Bigelow, CED’s Head of Entrepreneurship. “We have some emerging clusters in Agtech, Food Innovation, and Advanced Manufacturing that gives the state a broader base beyond our traditional strengths in biotech and software,” he added.

“Clearly the way these investment deals have been trending, being located outside of Silicon Valley or New York is not a deterrent to raising funds,” says Kelly Rowell, CED’s CEO. “Since CED started the Connect to Capital program, we’ve played an active role in making some of those deals happen,” she says. “More importantly the trend we are seeing locally, entrepreneurs investing in entrepreneurs brings a new level of sophistication to our ecosystem. A flywheel effect that further defines the culture of our startup community built on access, support and now investment. All foundational elements that bode well for long-term regional growth.”

About the Council for Entrepreneurial Development (CED)

The Council for Entrepreneurial Development was formed in 1984 by a group of business leaders wanting to empower the successful creation and growth of entrepreneurial companies in the North Carolina region. CED acts as the connective center for all of this to happen. Through high-touch support, education, access to capital, and crucial connections, CED brings entrepreneurs together with the optimal resources needed to turn a new company into a success story.

For more insights, download a copy of the full report here: cednc.org/give/investors/innovators-report/.